You are here: Home

Together with Sylvie Kempgens (Paves) from Brussels I was at the funeral Mass for Ruud Bunnik today in Arnhem. 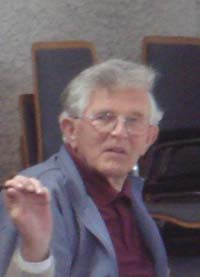 Ruud Bunnik will be remembered as an intellectual, a priest and a great liberator of our thinking about celibacy. He was nearly fired from the Ministerial Priesthood because of his first article about it in 1964. Afterwards he developed as a facilitator of nearly all the catholic renewal movements in the Netherlands on many items. He was not a radical, but a reformist . On the coffin there was his photo, the chalice which he received when he was ordained and a remarkable statue of a carpenter. His father was one. He was shot by the Nazi's in the Second World War. It made him what he became.

We were all very pleased that the woman he lived with was honoured and had the most important place during the celebration .We heard it gave some tension with the bishop.

Jan van Hooydonk the first press officer for the Eight of May movement said some important things about Ruud's role in the renewal movement.

I am sad we had to give back to God this courageous, humble and brilliant man.